Apollo 11 Celebration and Beyond: The Legacy of Women in the Future of Space

I wish to extend heartfelt congratulations and appreciation to NASA and the greater aerospace community on the 50th anniversary of the Apollo 11 Moon landing. On this day fifty years ago, one man took a small step from the Apollo Lunar Module, the Eagle, to the surface of the Moon and changed everything for humanity. And despite all of our technological advancement in the decades since, this moment stands alone. There are few efforts in the entire history of civilization more associated with the human desire and ability to transcend what is known and expected.

The images, sounds, and memories of Apollo uniquely represent innovation, possibility, and the future. Each successful mission throughout history is made possible by tens of thousands of people working closely with NASA behind the scenes—both employees and onsite contractors as well as the men and women of partner companies like Stellar Solutions! On this occasion, I am reminded of Hidden Figures, from NASA’s “human computers” to countless others, many whom may never be publicly recognized for their remarkable contributions that buoyed each of the agency’s breakthroughs discoveries and flights into the unknown. 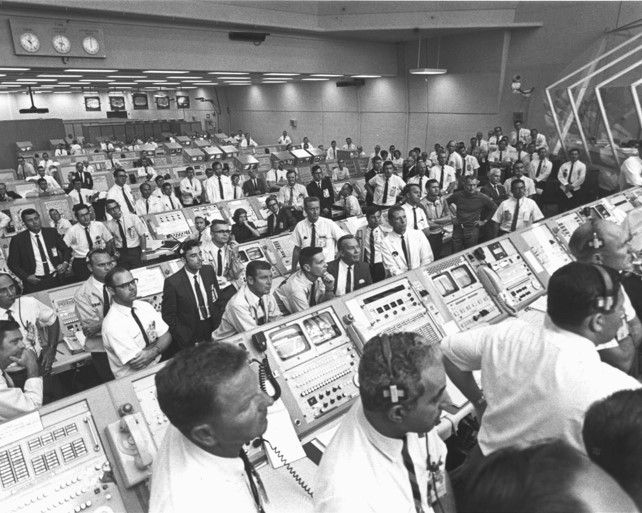 Luckily, in the space program of today and tomorrow, women’s involvement is no longer destined to fade into “secret” history. In fact, NASA’s next mission to the Moon has been aptly named Artemis after the sister of Apollo in Greek mythology. The agency’s administrator Jim Bridenstine has stressed that this endeavor will take the first of womankind into deep space, with many other firsts to come.

It’s no accident that a greater diversity of talent in the science and engineering of space technology is coinciding with a transformational stage in history. A new era of exploration is unfolding as the nation sets our sights again on the Moon – and then farther to Mars.  But we have other exciting things going on in the skies as well.  The evolution of the defense and intelligence fields is enabling us to take better care of our planet in a peaceful way, and we are seeing a proliferation of satellites that bring the Internet to the sky so we’ll stay connected with each other anywhere on Earth and even beyond.

What fuels this innovation is a broad mosaic of diverse inventors, engineers and explorers across established government agencies, corporations and disruptive entrepreneurial communities. In my experience, it is diversity – across nations, education, gender, and so much more – that unleashes the intellectual capacity, curiosity and passion needed to accomplish the impossible every day.

Nearly 25 years ago, I recall being the only female aerospace engineer in a control center launching satellites.  Although it was a thrilling challenge, the pressure of knowing that my voice stood out in the crowd on console and any mistake would not only impact the mission but my future career and that of the women that would follow me was an added dimension to the job.  It focused me on being the best I could be, and I gravitated to learning from co-workers and customers who were also best in their class.  Eventually as I became a mother of three, I realized that creating a flexible company that focused exclusively on important aerospace related programs with the best and brightest (“stellar”) people was my professional destiny.

I founded this global aerospace engineering solutions company built on the vision of “satisfying our customer’s critical needs while realizing our dream jobs”, which we all can agree continues to drive our strategic planning and culture even 25 years later.  I also wanted to “cross the boundaries” between civil, commercial, international, defense and intelligence programs as my career had introduced me to “stellar solutions” in every aerospace sector. Profoundly different approaches like these have fostered a a workplace where our “stars” are enabled to tackle problems no one else can solve.  And, coupled with a meticulous adherence to quality, we deliver high-impact and extraordinary outcomes for our clients.

This early focus on employee satisfaction–now achieving mainstream acceptance–resulted in a sustainable business model that also have served as a rewarding pathway for women.  I am proud to say we have an entire pipeline of female engineers, scientists and strategists extending from entry level to senior management, all making unique and significant contributions to Stellar’s current and future success.

Turning back to this historic moment, I recall that during the 1960s, girls were just as inspired and enthralled by space as boys, but this interest was mostly derailed by the societal expectations of the time. For example, girls writing letters to John Glenn who did actually dare to dream of exploring space,  often did so under a recurring theme: “even though I am a girl, I hope to be just like you”. It took NASA twenty years after the Soviets did during the 60s to send a woman to space–but perhaps Project Artemis can take us where no one woman has gone before in more ways than one.

I like to think of our trajectory in space exploration as a map for what is possible in the future.  Now we are continuing this incredible journey by expanding a sustainable human presence throughout the solar system, forever changing the concepts of “travel” and “home.” As Mercury, Gemini, and Apollo did before, Artemis is poised to introduce a new reality of exploring other worlds–this time to every single person on this world. NASA and its partners are taking the next giant leap, and women and others traditionally underrepresented in the thrill of exploration will move forward similarly. We will all take part in each advancement together, and build a legacy of learning, growth, and equality along the way.  A fitting reimagining of a world in which barriers to each individual’s potential for achievement will disappear, and we will all literally reach for the stars together.